Pivot Stove & Heating Co started back in 1876, and is proudly still privately owned by the Parker family : and 6 generations on, Greg Parker-Hill and his wife, Tammie, still 100% owned and operate.

What we do: Pivot specialize in high efficient and low emission wood heating and gas log fires : and we love our cooking.. our ESSE wood and electric cookers.

Our Pivot brands are

How we do this is through our Pivot retail stores in, Geelong and Melbourne, Plus a wholesale warehouse in North Geelong where we look after our iconic brands.

Nationally, our Pivot brands are available through a wide distribution network through heating stores right across Australia

Supporting our customers is high on our priority, and we have put together plenty of support packages including cooking classes, training days, an online spare parts web site, field days, our Facebook and Instagram social media posts and hundreds of video’s to help you get the best from your purchase.

Six generations on, Pivot Stove is now one of the few original companies that are still 100% owned by the same family – making us one of Australia’s longest running family business. 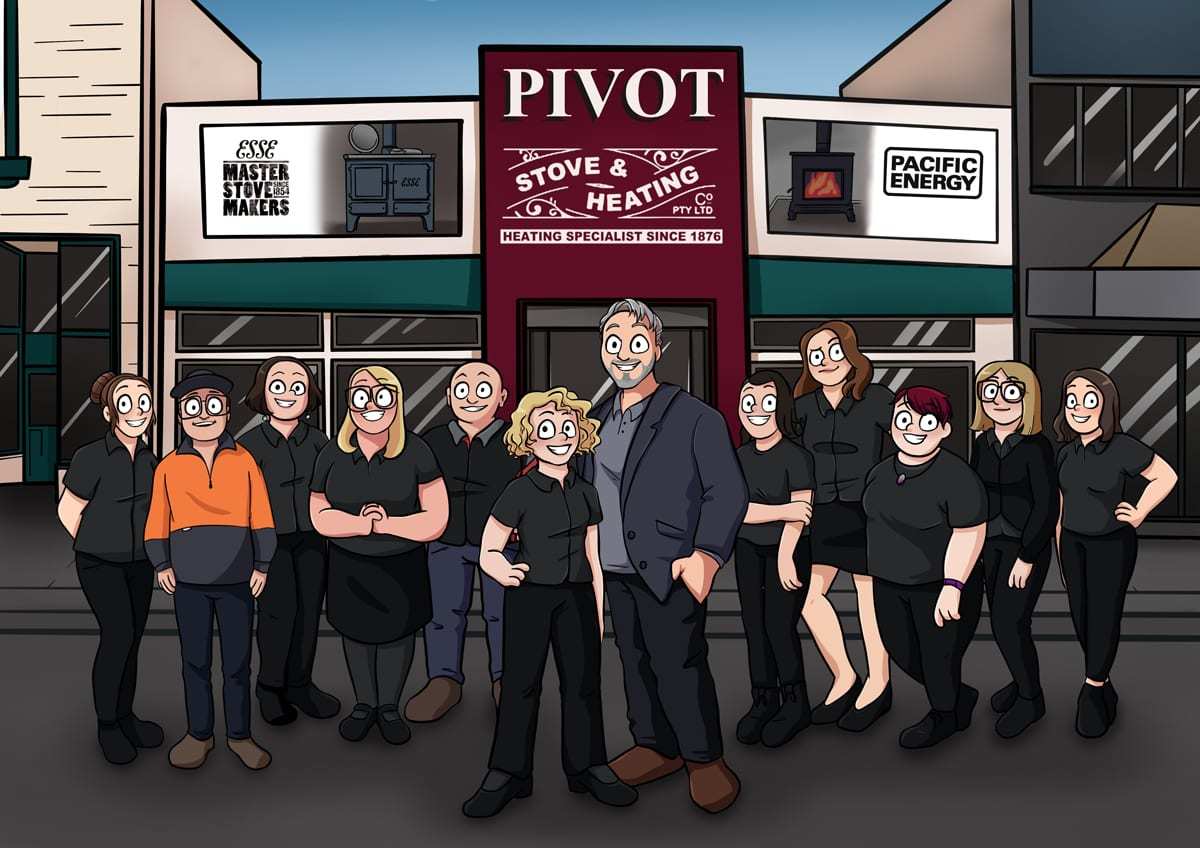 How Geelong and Pivot Stoves started.

The Pivot City is the original name of the township now called Geelong.

The original name of Pivot City came from the a special turn table that was constructed to turn a 300,000 pound steam train around ( because steam trains back in 1800’s didn’t go backwards ) so they could return back to Melbourne full of equipment that arrived from the Tall Ships that sailed in Corio Bay.

This turn table was called a PIVOT TURN TABLE, and with 4 Clydesdale horses tethered to turn the pivot table to turn the trains around, it was a site to be seen

The PIVOT name become iconic to our town, and even today locals called this Geelong, Pivot : even the Geelong Football Club membership is called the Pivotonians

From 1820 to 1880, Pivot City was a booming satellite town with the tall sailing ships from England arrived, sometimes daily, coming into Corio Bay (because of our natural deep bay) to be unloaded at Cunningham Pier.

Cunninham Pier was vital to Pivot City’s existence, the booming wool trade, and the gold form Ballarat and Bendigo was all loaded back on the tall ships to head back to England and the UK making Pivot City a vital corridor for all trade in the 1800’s.

It wasn’t until mid 1800’s the town was officially named to Geelong : from the local aboriginal name “Jillong”: meaning land of “hills and plains”. But the locals kept calling the new town of Geelong, Pivot City .

Pivot City ( or Geelong ) is a beautiful town with city to surf only minuets drive apart.

We have access to the bay, and to the ocean, country landscape to forests, and to the Great Ocean Road, and because of our easy life, a lot of people made Geelong home : and a lot of famous people who started other iconic businesses like

As for Pivot Stove, we originated back in 1876 when our founder James Alexander Parker, moved from Glenferry Road, Malvern, to set up shop at Moorabool Street address, where he proceeded to manufacture the 1st Australian made slow combustion wood stove, The Pivot Stove.

Naming the business after his new home town : Pivot Stove was born, and in our Moorabool Street showroom ( still at the same location ) you can still see one of the 1st ever Pivot Stoves we made. 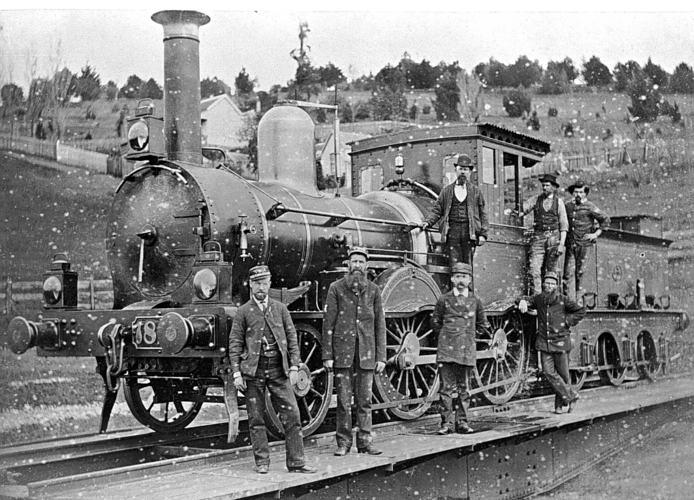 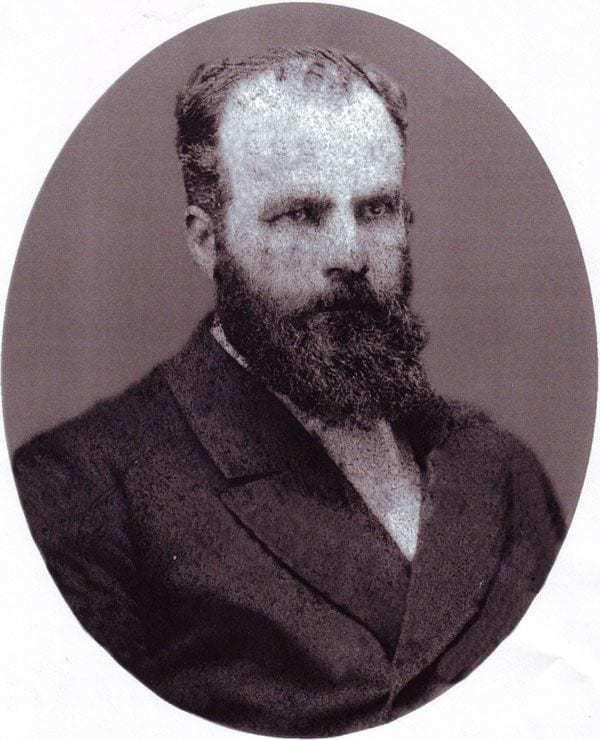 John Parker, a bricklayer from Kent in England arrived in Port Phillip with his family on board the Grand Trianon in 1857.

John moved to Melbourne Victoria and purchased a building in Glenferry Road, Malvern and set up Parker & Co 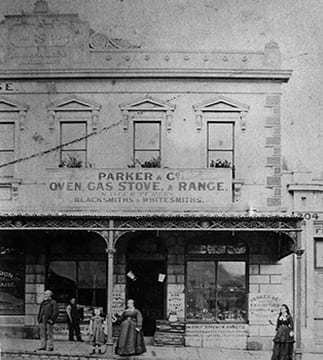 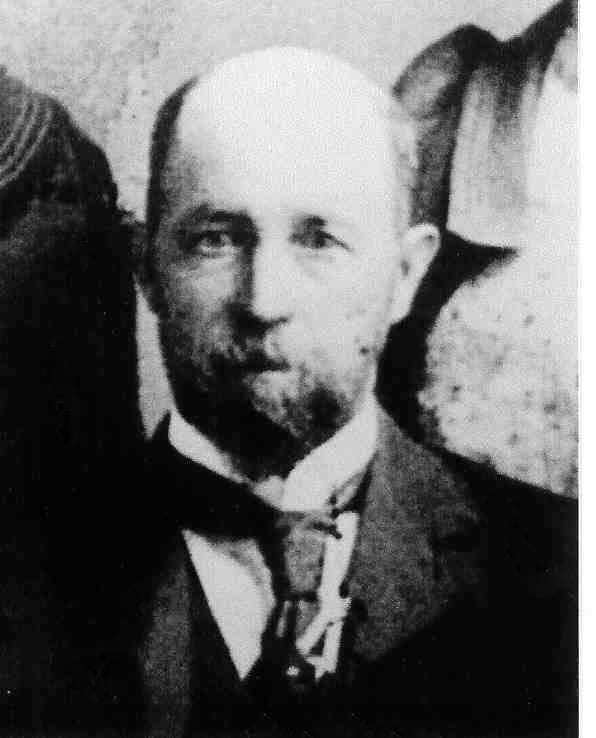 The Pivot Stove was Australia’s 1st designed and manufactured Slow Combustion Wood Stove, and from this, Australia’s Wood Stove industry was founded.

Brands like, The Carmichael Wood Stove, IXL Wood Stove, LUX Wood Stove; all these were created by the work James Parker did. 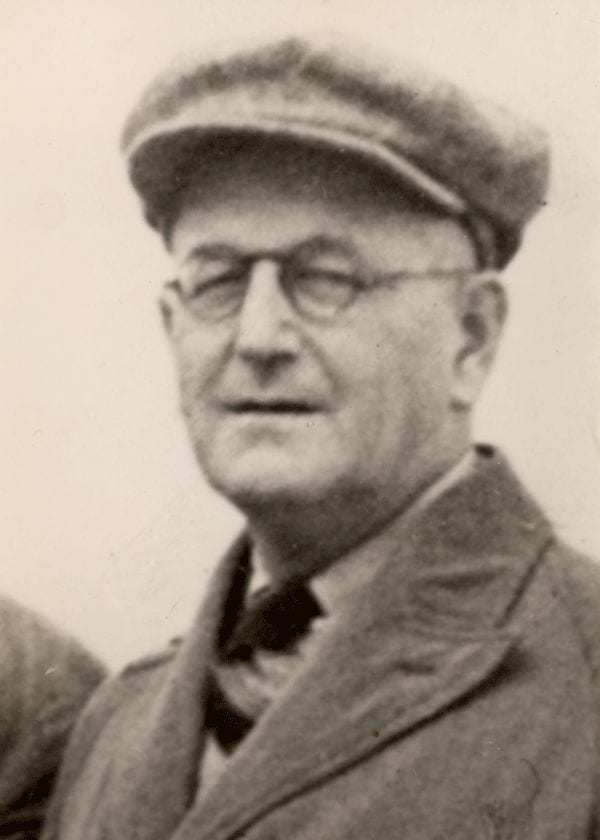 Towards the end of the 1st world war, Charles closed down the steel works and manufacturing of the Pivot Stove due to the struggle to get raw materials post war, and focused the business in supply and installation of Brickett heaters as well as Wood stoves. 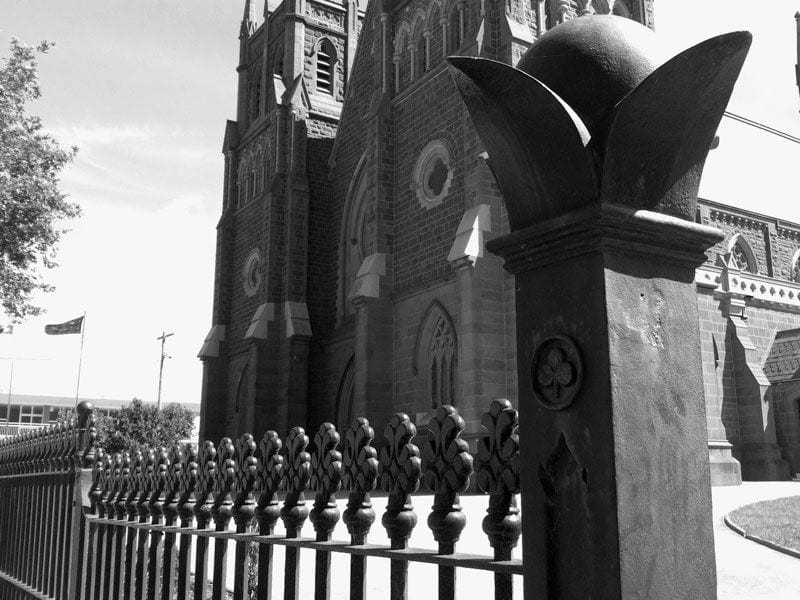 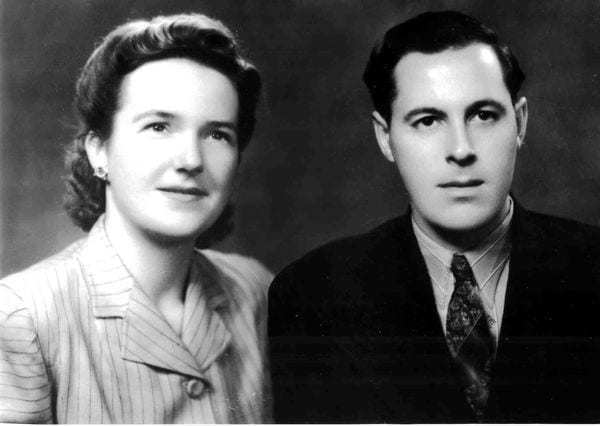 Lindsay Charles Parker (son of Charles) and Wife Joy took over and introduce the latest Oil Heaters including the Vulcan Burwood Oil Heater.

Joy passed away in 1964 from a long suffering illness of MS. Lindsay eventually remarried to Margery in the early 1970’s.

The Passing of Joy left a passion for Lindsay for local charities and raised many thousands of dollars to support the MS Society.

Lindsay was also instrumental in the business community in Geelong and supported local commerce through his involvement of the Geelong local community and Church groups. 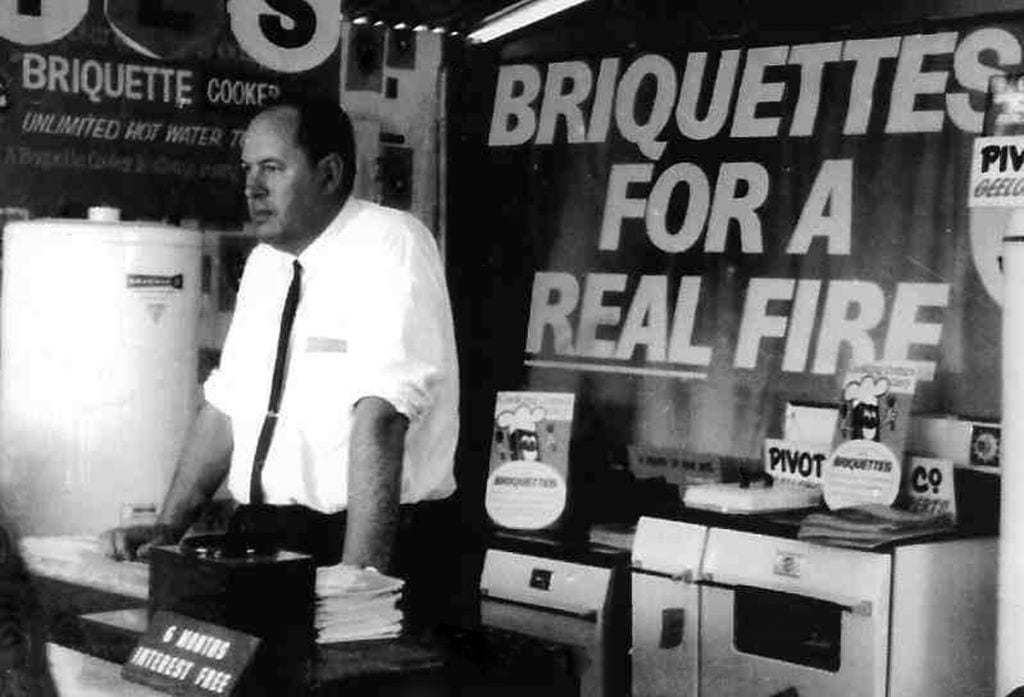 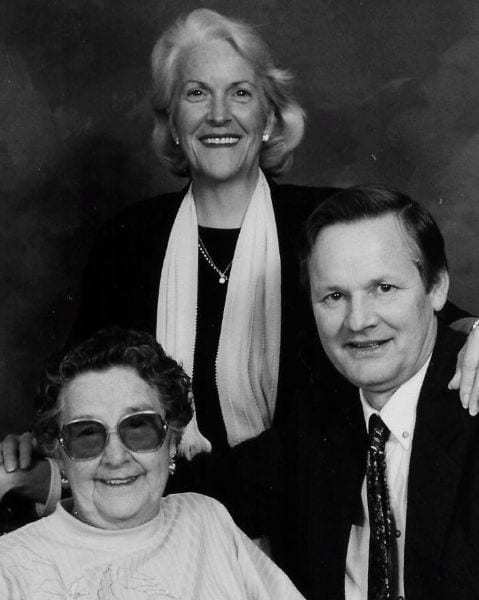 With the Wood Heater boom in the early 1990’s, and the introduction of the latest in Gas Log fires, Pivot outgrow their showroom in Moorabool Street – and because of this growth, Merril and Peter moved the family home from out the back of 230 Moorabool Street and expanded the retail showroom to be one of the largest displays of the new style gas log fires. 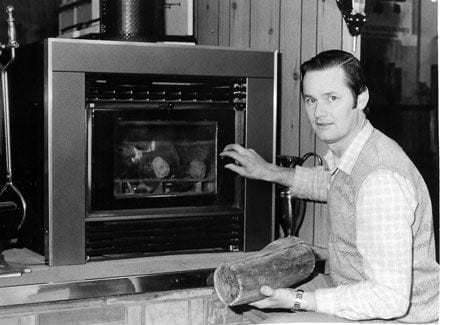 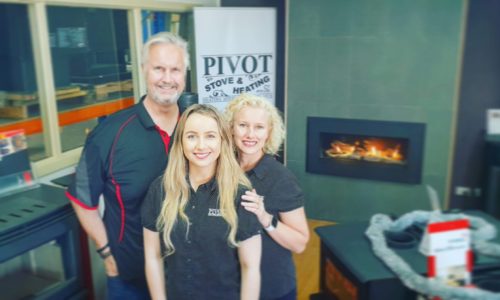 Growing up at the house at the back of the Moorabool street, from very early days, Greg worked with his father learning to service oil heaters, and eventually did a plumbing apprenticeship and worked installing , servicing and re-building wood heaters and cookers for over 20 years.

– In 2006, Greg, and his wife Tammie, took over Pivot Stove and Greg looked world wide to find products that would take Pivot to being a true leader in the heating industry

ESSE Cookers: hand made in England since 1854 returned Pivot to our original passion, cooking

Pacific Energy: Canadian made heaters that are made to work in the harshest of conditions and have the latest in efficiency and low emissions

Pyroclassic: NZ made, Pyroclassic are known for having a low environmental impact

Yunca: For homes that live off the grid, these can also heat your water and are one of New Zealand’s most loved wood heaters

– In 2011, Pivot’s wholesale moved into their first offsite warehouse, and outgrew this in 2016 where Pivot moved to 120 Victoria Street, Nth Geelong. This 5,000m2 building hosts our wholesale division and administration

And each year, over 620 people attend Pivot’s Pop Up ESSE Restaurants